Congratulations to our Managing Attorney Kelly Cosentino, for her selection in the 2020 class of the ALFN Junior Professional Executives 7th annual “Picture the Future” List of Outstanding Young Professionals to Watch.

In the 2020 class, Kelly is one of 12 individuals named to the “Young Professionals to Watch” list. Her selection from a pool of nominees spans a national network of legal and residential mortgage banking & servicing professionals. Individuals named to this list undergo a blind, committee based peer review. All references to gender, geographical location, name, and their company affiliation are removed from the nomination forms so the review committee’s selections are made based solely on the merits of the candidates’ professional achievements.

All of us at Gross Polowy are proud of Kelly for her career achievements and are thankful for her contributions to our team!

Gross Polowy is a proud member of the American Legal & Financial Network. 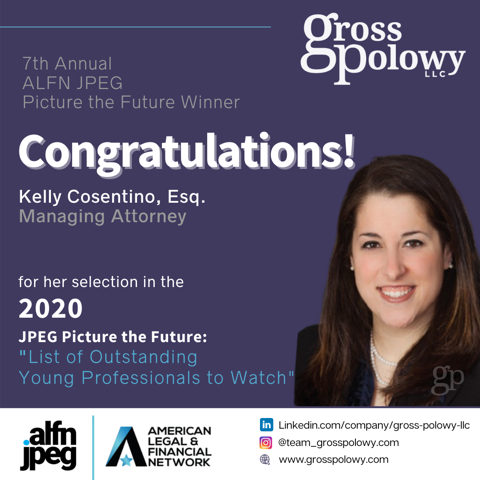 Business First runs this annual competition to honor companies that create a fun, challenging, and rewarding workplace.  Gross Polowy has been names Best Places to Work since 2016.

Gross Polowy hosted an event to help Strike Out Cystic Fibrosis!  Cystic fibrosis is a life-threatening, genetic disease that causes persistent lung infections and progressively limits the ability to breathe.

We had a great turnout for this event that happened on August 19th.  We were able to raise $1361 towards this cause.

I’d like to thank the following organizations that donated to this event, such as the Buffalo Bisons, Cats Like Us, Rochester Americans, LA Fitness, Applebee’s, Anderson’s, Exit 2 Restaurant and SkyZone. Of course to Manor Lanes for hosting us!

Gross Polowy is hosting an event to help Strike Out Cystic Fibrosis! Review the attached flyer for details. Cystic fibrosis is a life-threatening, genetic disease that causes persistent lung infections and progressively limits the ability to breathe. Gross Polowy will be hosting a Blood Drive on Thursday, August 27th from 11am – 3pm. To schedule an appointment visit www.unytsblooddonor.org and enter Sponsor Code 000230 or call Unyts at 716-512-7940.

Since beginning collections in June 2007, Unyts (Upstate New York Transplant Services) has become the primary supplier of blood products for ECMC, Kaleida Health, and all the hospitals in Niagara and Wyoming Counties. Our local hospitals need to maintain an adequate supply of blood for emergency situations and it is up to Unyts and the generosity of donors to help provide safe levels of blood inventory.